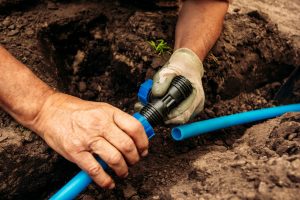 The invention of a dedicated sprinkler system revolutionized residential and commercial irrigation. If it weren’t for the humble sprinkler, we would still be needing to manually water our lawns with a heavy garden hose every time the plant life in our yards needed watering.

But as fantastic inventions go, they’re not without their own susceptibility to breaking. Yes, sprinkler systems are wonderful inventions, especially the most modern models out there, but every now and again there will still be signs of damage that’ll show. A bit of wear and tear that comes with any material object that we use in our lives.

Whether you intend to make sprinkler system problems a DIY project or contact a service to do the job for you, it’s going to be a lot of help to get a bit of knowledge as to what’s in store for you.

When thick roots such as those from a tree grow too close to the pipes under your lawn, it can end up digging into your pipes or breaking them, causing a leak. Broken pipes can also be caused by shovel work that gets too out of hand. For either case, leakages in the pipes can often be detected when you find oddly moist spots in the soil when the water is left running.

Get a bit of PVC cement to patch up the pipes and they’ll be good as new as soon as the cement dries. Of course, this requires a bit of shoveling so prepare a shovel or a trowel, and a lot of elbow grease. For more extensive damage, you’re going to want to replace that part of the piping entirely.

Since the sprinkler heads are the components most visible above ground, they’re going to be facing a ton of damage from all sorts of sources. For one thing, they can be damaged by natural elements such as a strong flood. Sprinkler heads can also face problems when a bit of dirt and grime have found themselves stuck on the sprinkler heads.

The easy solution for this is to shut off the water for a while to inspect your sprinkler heads for what may be causing the irregular irrigation. If it’s just a bit of grime stuck to the head, prepare to get it off with just a simple wash. If the sprinkler head has taken considerable damage from something more extreme, then it would be best to instead replace the head entirely. Depending on the type of head and the materials that it’s made of, you can have a varying range of prices to choose from.

If you have several zones in your lawn dedicated to specific grass and greenery, dead zones can end up wilting your precious plants. This particular issue may be a technical problem in the timers or the sprinkler system’s controller. As such, it would be best to get a professional to have a look at this issue.

If the timer or controller is broken beyond repair, it’s going to be a hefty price to pay for a new one but it’s a necessary sacrifice to save the life of your greens.